No, Yoga Is Not Political—Unless That’s Your Calling 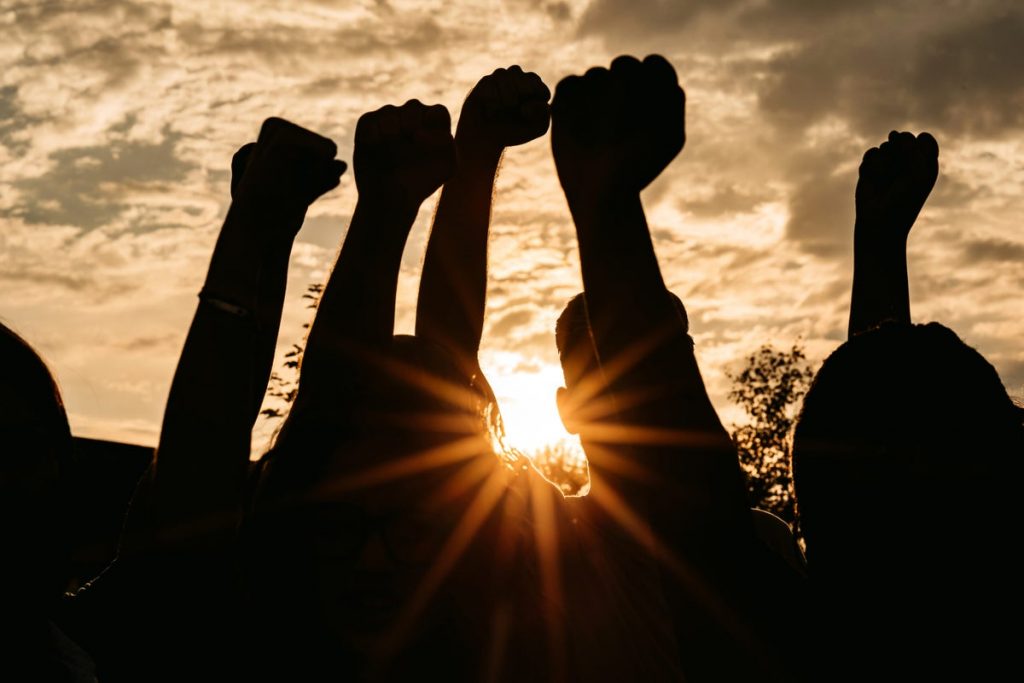 For exclusive access to all our stories, including sequences, teacher tips, video classes, and more,
>”,”name”:”in-content-cta”,”type”:”link”}}”>join Outside+ today.

Many in modern or Western yoga claim that one’s yoga practice must include political or social activism as a way to help liberate others. But I argue that yoga is neither political nor social activism. The true practice of yoga leads us always to stand on the side of dharma. It informs our actions.

What the Bhagavad Gita tells us about politics and yoga

Those who suggest that “yoga is political” often quote the teachings from the Bhagavad Gita to support this idea. The Gita is a dialogue between the warrior-prince Arjuna and Lord Krishna during the battle fought between Arjuna’s family, the Pandavas, and Duryodhana’s family, the Kauravas.

Before the battle, Arjuna experiences deep inner struggle. He questions the effects war will have on the kingdom and on the people on both sides. He struggles with the harm that this war would bring to his loved ones. His conscience tells him that the death of thousands at his hands would make him a murderer. The thought of the guilt that he would carry leaves him disheartened. He feels physically weak—unable even to pick up his bow and arrow.

Lord Krishna shares the knowledge and wisdom that comes from svādhyāya (self-study) that guides Arjuna from utter turmoil to mental steadiness. Once Arjuna has achieved this state known as yoga, he will know what he is called to do and he will be able to perform his duties with precise clarity.

Because this story centers around circumstances of war, many in the yoga community are quick to say the Gita revolves around politics and therefore this makes yoga political. Sadly, this is terribly misunderstood. You see, when Arjuna picks up his weapons for battle, it is not for a political or social outcome. Nor is it to feed his ego or for personal glory. He battles because it is his swadharma as a warrior.

In Sanskrit, swa means “oneself or own” and dharma means “duty.”  Swadharma is dependent on an individual’s unique nature, duties, responsibilities, and choices of action for a healthier mind and body.

In Hindu culture, the term dharma refers to the divine order or the rhythm of all creation within the entire universe. It is not to be confused with pursuing an individual’s calling or passion. When we are following our swadharma, we understand that the fruits of our actions are not to benefit our personal motives, but to benefit the community and nature first. Dharma can inform swadharma, and swadharma can uphold dharma, but they are not identical concepts.

Arjuna’s swadharma calls him to stand on the side of what is right for the kingdom and its people. Because of this calling, he can do so even when himsa, violence, is involved. He understands that he must go into battle.

When you understand yoga from an Indigenous lens, you understand that swadharma, not politics, guided Arjuna. If we are truly practicing yoga, it is the same for all of us. Our decisions come from our informed understanding about what is relevant to us and to our community, and the role we are called to play.

It’s easy to claim that “yoga is political” or “yoga is social justice”—and to see everything from that perspective. But this perception comes from a misunderstanding of what yoga is and a lack of context for how yoga guides our actions.

As far as I remember, the definition of yoga has always been and remains the same. The meaning of yoga—the Sanskrit term is yuj—is joining the individual consciousness, jivatma, with the ultimate consciousness, paramatma. Yuj also means to have control over the senses and stability of mind. Maharishi Vyas describes it as a state where nothing exists except awareness. Yoga’s teachings are about living a fulfilled life, ultimately attaining moksha, liberation from the cycle of suffering.

Political activism, social activism, and even “sacred activism”—activism that is rooted in ones’ spiritual calling—are about creating policies and laws that benefit a group. Any kind of activism, then, is fighting for one thing or against another. It unites people within groups, but it also divides groups. It provides and creates stability for those within a group and shakes things up for those outside.

Activism recruits those with the same views to help push a group’s agenda. The stronger the group, the stronger the collective voice and the stronger the hold on that group’s chosen narrative. If your view differs from that of another person or group, it can lead to discord and exclusion. It may also lead to judgment, shaming, bullying, calling out, and ultimately “cancel culture.”

Politics can disconnect us from the purpose of yoga

Insisting that yoga is political is a perfect example of how Western yoga voices sadly misunderstand Hindu scriptures. At best, it reflects a shallow understanding of the true essence of yoga. At worst, it demonstrates a disregard for a living culture and its indigenous teachings.

When yoga’s history and teachings are taught from a modern, Western lens that includes politics or activism, the concept of dharma can be overlooked and misunderstood. Many Western yoga students have never heard the concept of swadharma at all when, in fact, our actions are not yoga unless they are rooted in swadharma.

From a yogic perspective, the view that yoga is political can create a spiritual disconnect from one’s practice. It can further entrench a person in ideals and beliefs that may not support dharmic actions and may not be led by swadharma. When yoga teachers and leaders exclude this perspective—because they don’t know it, or choose not to include it—the result is an unbalanced representation of the meaning of swadharma.

Yoga is a medium, a discernment tool, and an internal practice of self-realization and liberation from our mental attachments. It is a means of questioning our own beliefs and judgments. It is a practice that guides us as we evolve or transition from one stage of life to the next. And it is our inner compass, giving us direction, enabling us to perform our personal dharmic duties with viveka and vairagya—discernment and dispassion. And that, in turn, empowers and uplifts our social structures while respecting humanity.

We’re all on our own paths

I have an uncle, a retired Brigadier General in the Indian army who has been in four wars. I once asked him if his yoga practice was political? His response: “Yoga is that practice which keeps my body healthy and mind sharp to enable me to fulfill my commitments as a person toward society. But I rely on studying the Bhagavad Gita for guidance on how to perform my swadharma—that of an army officer at war.”

Consider others like him who are on the battlefield or protecting borders. Or health care workers who are striving to keep our loved ones alive, teachers educating our children, or people who otherwise dedicate their lives in seva of others. They do it despite differences in political views from those they are serving. Why? For many of them it is because of their swadharma—their duty, their oath, and their commitment to uphold dharma, the cosmic order.

While political engagement and social justice are important—and some of us are called to political action—we need the teachings of yoga to help us discern our own role within the bigger picture. We must practice svādhyāya with the aim of forming our own choices with clarity and wisdom, based on the stage of life we are in. Our decisions must stem from clarity about what we, ourselves, are called to do and not from herd mentality. This is far more beneficial than simply following the masses because they scream the loudest.

See also: Why Yoga Has Always Been Political

Savira Gupta comes from a family of strong women rooted in the Arya Samaj Tradition,  founded in April 1875 by Swami Dayanand Saraswati, who wanted to revive the Vedic way of life and the need to create a just society for all despite color, cast or creed. She grew up in Malaysia, India, and France and spent her adult years in the UK and the US—global experiences that have given her the foundation to relate to people from all walks of life. She strongly believes that yoga, no matter how much one tries to redefine it, will redefine the practitioner.

Practice for Peace: An Online Yoga and Meditation Class to Help Children with Cancer in Ukraine