From frozen shoulder to fit & fierce

By fitsavers-January 25, 2022No Comments7 Mins Read 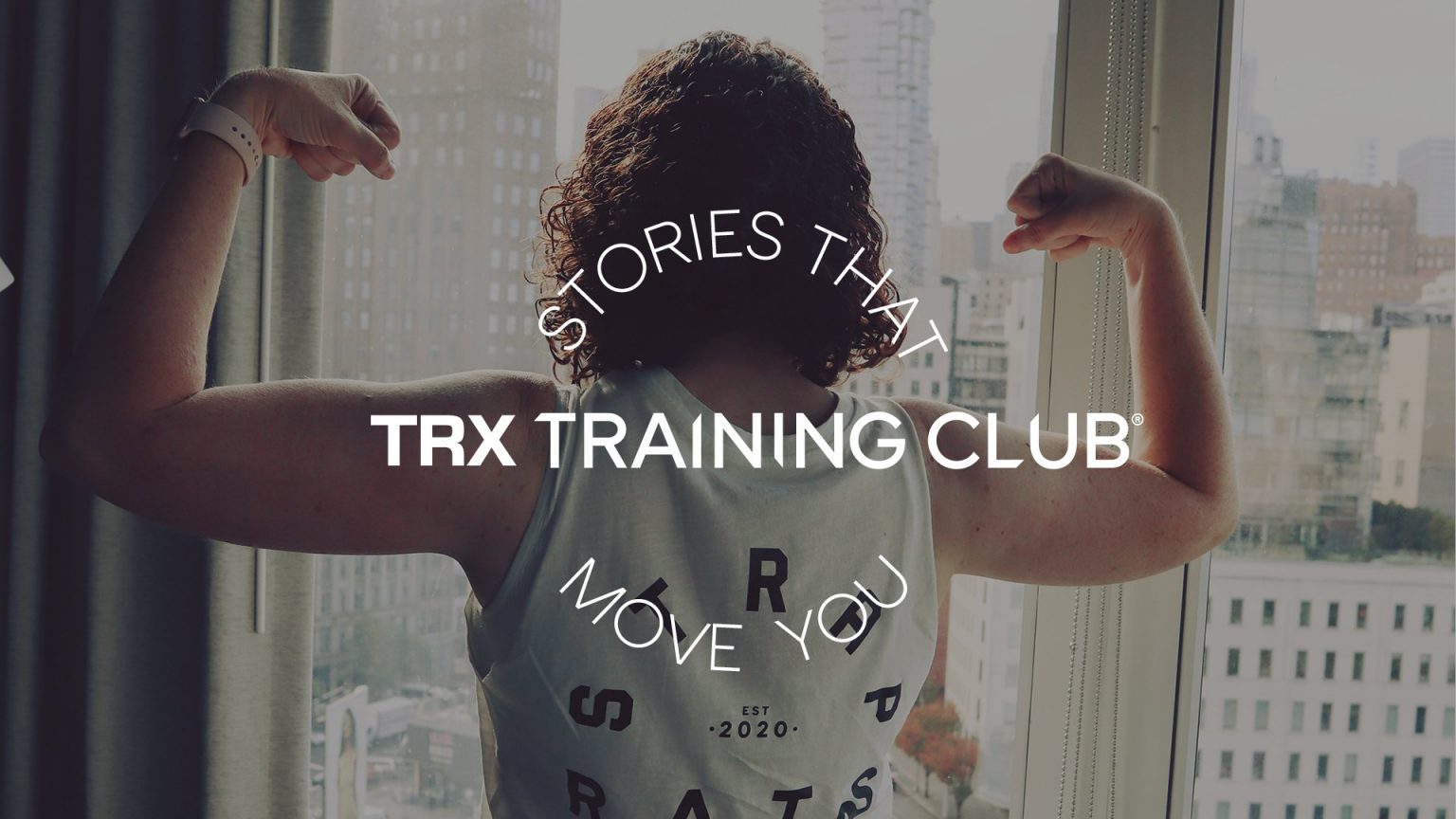 After nearly 3 years of surgeries and setbacks, TRX Training Club® member Mary returns to form with a ferociously funny wit and talks to us about injuries, adversity, and strength.

At first glance, it appears that Mary is either on the precipice of revealing a deeply guarded secret, or withholding a perfectly timed joke. Both are true. She’s sitting in the crook of a deep sofa, swishing the champagne in her glass back and forth. The walls of the grand, ornate room we’re in are full of color and art and beautiful clutter, but Mary looks only at me, a smile animating her entire face. Her hair is curly and short, and it waves with every laugh, which is often. Her glass of champagne rests atop her thigh, her eyes momentarily looking down at it, studying its bubbles as she collects her thoughts. There’s a flurry of activity to our right—a woman in bright red tights has rushed in. A set of TRX Suspension Trainer™ straps dangle from her purse. Mary immediately stands, shrugs apologetically toward me, and runs to greet her friend, their bodies colliding in a mad, ecstatic rush. A few minutes later, she sits back down.

“I’m so nervous,” she says at the start of our conversation. “I haven’t really spoken about this. Oh geez, where do I start?” She laughs, a joke that only she knows reverberating in her head, and takes another sip of her drink. I know what she’s thinking—it’s a miracle she’s where she is now, working out multiple times a week and thriving. But, we both know it’s not a miracle.

In 2018, Mary was diagnosed with breast cancer. She started chemotherapy within two weeks of finding out, but this was only the start of her treatment—within 3 months she’d have a double mastectomy, then go on to radiation treatment, and multiple other reconstructive surgeries. In total, she would have 6 surgeries in the span of a couple years. When she first began chemo, one of her first questions was about physical activity. “I asked my oncologist, ‘So what should I be doing with chemo, should I do hot yoga? He told me, ‘Maybe take a break from sweaty people sweating germs.’”

Mary would be the first to tell you that exercise is not her thing. An enjoyer of tennis, with some cross country sprinkled in during high school (“It wrecked my knees”), by the time college rolled around, Mary didn’t pursue anything athletic. “I got great at beer pong,” she joked, “my hand eye coordination skills were GREAT.” Eventually, she discovered yoga and reformer pilates, which she felt were more her speed. The targeted, deep muscular work and focus on breathing helped alleviate some pains she experienced during both of her pregnancies, particularly her back and hips. Her dedication to yoga was so great, it was the first time she felt sad to give up an activity during her treatment phases, and it was the first activity she pursued when she finally received clearance for fitness in February 2020.

Then, the pandemic hit. In her immunocompromised state, everything was off the table except for home workouts, but yoga on her own wasn’t feeling as good as before—Mary had been struggling with two frozen shoulders for quite awhile that severely limited her mobility. 6-8 months of physical therapy didn’t fully alleviate the situation. This coupled with her multiple surgeries left her feeling weak, unsure how to move forward, or move at all.

“I had lost sooo much muscle tone. I felt really, really fragile. My husband would say to our kids, ‘We have to be careful with mommy.’ I didn’t have anyone to guide me.” An expression of sorrow briefly washes across Mary’s porcelain face before the witty twinkle returns. Mary likes to keep it light.

She told me that a fortuitous opportunity presented itself when an old friend invited her to try a new workout—TRX Training Club®. Mary was against it at first and balked at her friend. “I don’t think you understand,” she joked. “I’m coming off 18 months of doing nothing, two frozen shoulders… the worst one? That’ll be me. I’m literally starting from ground zero.” All joking aside, Mary had some valid concerns. She finally relented, figuring she had nothing to lose. As it turned out, she had everything to gain. And it was life-changing.

Within 3 months Mary was taking LIVE classes 3 days a week. Within 6 months, she performed her first pushup with a targeted On Demand workout. Within a year, she attempted, and succeeded at her first complete handstand—an incredible feat for anyone, let alone someone who had endured what she had. Before using her Suspension Training® straps and being guided by expert trainer Niko Algieri through the app, Mary couldn’t perform a single pushup. Mary shook her head ruefully at the memory.

“I had been doing physical therapy for my shoulder for 8 months—I even had a cortisone shot—but I wanted to supplement that work with more traditional strength moves. I was so afraid of pushups, that movement was so scary for me. With the TRX, I realized I could adjust weight on the fly. The straps let you slowly adjust the weight. It was a literal support system for me. And I could CONTROL that support.”

The increased strength and mobility was a boon for Mary’s confidence, but what also impressed her was the ability to perform and regain her yoga skills on the Suspension Trainer™—something she had missed greatly since her pre-pandemic, pre-cancer days. “I couldn’t do a lot of yoga because I didn’t have mobility anymore and I was afraid of falling, but with the straps, I could support my weight in Camel Pose. It’s a very, very vulnerable pose if you don’t have the strength to lean on your shoulders. But with the straps I slowly built up my ability and range of motion until I could do it fully. It was like having a safety net.”

Throughout the conversation, Mary’s expression oscillates from seriousness to sassiness in a flash, a lightness that belies the many challenges she overcame. A stranger might think she diminishes her own experience, someone who doesn’t give her struggles the gravitas they “deserve.” Mary doesn’t believe in this.

“What they don’t tell you about survivorship is that you focus so much on what you can do… that it becomes your world. There’s not a lot you can control, but I can control my strength, my focus, my mental health. I choose to be constructive in a really destructive time.”

Mary travels a lot for her line of work as a high-powered executive, which makes her all the more thankful for her Suspension Trainer™ straps—they pack easily in a bag and all she has to do is hang them over a hotel room door and flip on the app. Her favorite move? Pistol Squats. She can barely believe it, either. Excited, she motions me a little closer. “I got a towel hickey from doing a plank on the hotel floor with the straps.” She bites her lip, clamping shut what’s bound to be a loud laugh. Mary loves to tell a good story. “I’m definitely the funny, self-deprecating jokester of my friends,” she says.

But what about tracking? I ask. TRX Training Club® is highly functional but utilitarian—it specializes in workouts that truly work, and amazing, one-of-a-kind trainers who guide you, both of which it does exceptionally well. “A lot of people are really into smart tech,” I say. Mary tells me she prefers to track meaningful progress, like doing 10 pushups when before she could do none. When I ask her about fitness trackers and activity monitors, Mary snorts, waves a hand lazily in the air, bringing us back full circle with a sidelong gaze, humor twinkling in her eye.

“Those people aren’t fun at parties,” she quips.