By fitsavers-January 28, 2022No Comments4 Mins Read 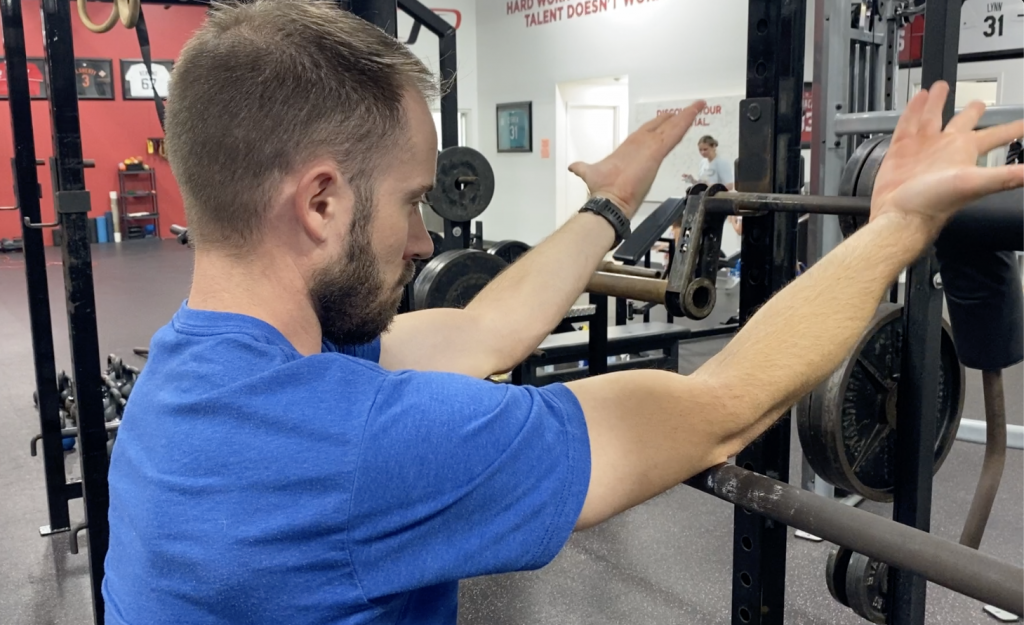 The benefits of controlled articular rotations (CARs) are now well known in the strength and conditioning and rehabilitation realms, thanks to Functional Range Conditioning teachings. One way in which we’ve evolved this approach is by taking a closer look at the position at which we perform our elbow CARs. Historically, they’ve been performed with the arms at the sides, like this:

However, I think there’s a lot more benefit to be gained by performing them with the upper arms supported at 90 degrees of flexion, particularly in an overhead athlete population.

2. In throwing athletes, you’ll commonly observe Bennett’s lesions, areas of increased calcification along the posterior glenoid rim. For most athletes, they’re incidental findings in asymptomatic shoulders, but in some cases, they can get too big and cause rotator cuff pathology (I relate it to a speed bump that the cuff has to go over). While the true cause of Bennett’s lesions has been debated in the sports medicine world, many are of the belief that it results from traction stress from the long head of the triceps (LHOT) tendon. The tendon attaches on the supraglenoid tubercle (which is on the inferior aspect of the glenoid) and extends up to the labrum and joint capsule. LHOT also eccentrically prevents excessive elbow flexion during the cocking phase of throwing (think of it being heavily lengthened in a shorter catcher-like arm action).

So, whether you believe it’s related to Bennett’s lesions or not, there’s a strong anatomical basis for us to say that the long head of the triceps is an extremely important – but heavily underappreciated – muscle for overhead athletes. I’ve seen a lot of throwers over the years who’ve benefited tremendously from manual therapy on the triceps – and this mobility drill is a useful proactive initiative that’ll help the cause as well.

3. At positions of 90 degrees of shoulder flexion or more, we get greater serratus anterior recruitment to drive the rotational component of scapular upward rotation – but also a reduction in latissimus dorsi tone that can restrict it. This is particularly important in athletic populations that tend to carry a lot of extensor tone and live in scapular depression and/or downward rotation. It also gives these folks a break from competing against gravity, so it can actually reduce protective tension of the upper traps.

4. Building on this last point, serratus anterior also works to preserve the convex-concave relationship between the scapula and rib cage, which is particularly important to address in the aforementioned athletes who may have acquired flat (extended) thoracic spines over years of extension/rotation. These athletes crave reaching, rounding, and rotating.

You can add this to a warm-up, use it as a filler, or plug it into a cooldown. Take your time with each rep, and be sure to drive not only full elbow flexion/extension, but also pronation/supination of the forearm.

If you’re looking to learn a bit more about long head of the triceps, I’d encourage you to check out my Sturdy Shoulder Solutions course, as I delve into it quite a bit as part of my upper extremity functional anatomy module.

Sign-up Today for our FREE Newsletter and receive a four-part video series on how to deadlift!

No Time for the Gym (by Trainer Neale Davis)