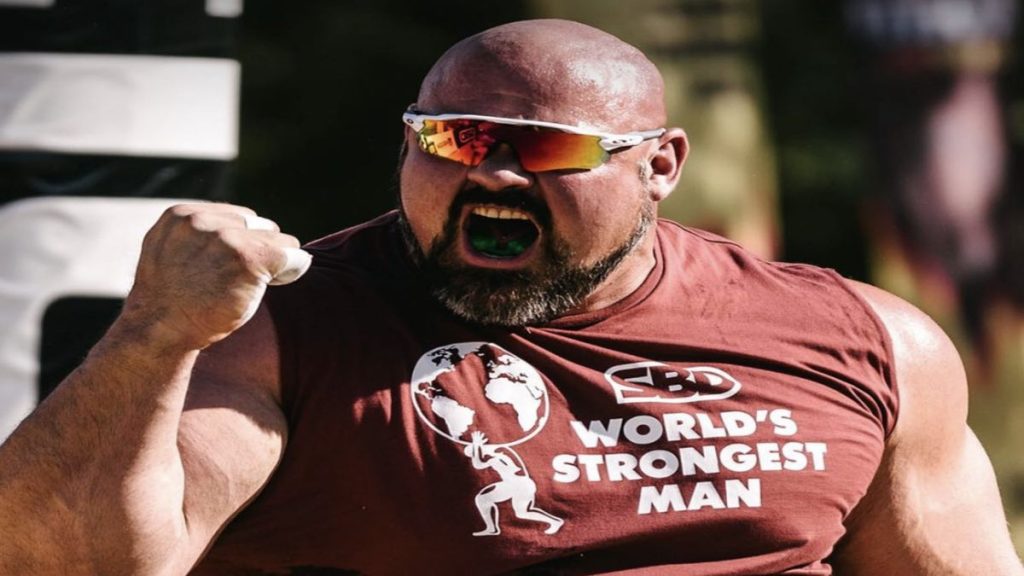 The 2022 World’s Strongest Man (WSM) is set to occur on May 24-29, 2022, in Sacramento, CA. The premier event in the strongman sphere will yet again see some of the world’s top strength sports athletes vie for the legendary Barry Frank Trophy. On April 27, 2022, the WSM organization revealed this year’s competition’s respective event format.

Here is the full lineup and schedule of events, including the Qualifying Stage and a two-day Finals:

At the time of this writing, WSM has not announced which athletes will be in their specific Qualifying Groups. Notably, the 2021 WSM saw different, random draws for the various events. This year, every Qualifying Group will take on the same events.

The 2022 WSM format will consist of five groups with six athletes each. The respective winner of each group advances to the Final, while the second and third-place finishers will clash in a Stone Off to notch a spot in the Final. The fourth, fifth, and sixth-place athletes will leave the competition.

In the Stone Off, the onus is on the third-place finisher — who has the first crack at lifting the stones and risks elimination if they fail to complete a lift. That result will hold even if they raise the same number of stones as their competitor. The five respective winners of the Stone Off will take the remaining spots in the Final.

Here are more specifics on the events that the competitors can expect in Sacramento.

One of strongman’s customary events, the Loading Race will make another appearance at the 2022 WSM. It was an event that every Qualifying Group took part in during the 2021 WSM.

The 2021 respective Loading Race winners are reigning WSM Champion Tom Stoltman, Maxime Boudreault, Konstantine Janashia, Kevin Faires, and Robert Oberst. Each of these competitors has a place in the 2022 lineup save for Oberst.

Meanwhile, the Deadlift Ladder event makes its debut during the 2022 WSM. Competitors will start their deadlifts with 650-pound barbells and eventually work their way up to 750 pounds. The athletes have an extra incentive to finish their pulls quickly, which will reward them with more points.

Another event making a return after an absence, the Car Walk will see the athletes strap a Volkswagen Bug to their shoulders as they attempt to walk it down a 25-meter path. 2019 WSM Champion Martin Licis is a competitor to watch here.

Licis typically excels with the Yoke Walk — which is similar to the Car Walk, albeit with the car being more unwieldy. The strongman crushed a Yoke Walk during the 2021 Rogue Invitational when he carried a 455-kilogram yoke (1,000-pound) 50 feet in just over 44 seconds. That mark was enough to have Licis lap the next best competitor by almost six seconds and garner a second-place finish to Mateusz Kieliszkowski (41.74 seconds) — who recently withdrew from the 2022 WSM competition.

The Log Lift should be a spectacle to watch. Many of the featured athletes fare pretty well with their overhead strength.

Bobby Thompson in particular will be under the microscope as he holds the American log lift record with a 217.5-kilogram press (479.5 pounds) from the 2021 Clash on the Coast. The 2021 Europe’s Strongest Man (ESM) Luke Stoltman should also be someone to keep an eye on. Stoltman holds the British log lift record with a 221-kilogram press (487-pound) from the World Ultimate Strongman’s “Feat of Strength” series.

The Wrecking Ball Hold is making its first-ever appearance at the WSM competition. Athletes will have the task of lifting a massive wrecking ball and holding it for as long as possible.

The Stone Off will be no surprise to the competitors who are intimately familiar with the famed Atlas Stones. Tom “King of the Stones” Stoltman might be the favorite. He won the final Atlas Stones event (five lifts in 20.21 seconds) during the 2021 WSM — a major factor in his eventual victory.

Two of the athletes, Trey Mitchell and 2022 ESM Champion Oleksii Novikov, should also make easy work of the stones. The two strongmen had a Stone Off for the ages during the 2019 WSM when Mitchell’s 14 successful staggering reps beat Novikov’s 13.

Including his recent ESM victory, Novikov has qualified for the podium in 13 of his last 14 sanctioned competitions. He is assuredly seeking redemption after not advancing from the 2021 Qualifying Round.

The KNAACK® Giants Medley is comparable to the Loading Race, save for a structure that features a box carry and super Yoke.

At the time of writing, the WSM organization hasn’t confirmed whether the deadlift event is for a one-rep max or for reps. After tying for first (10 reps each) during the 2021 WSM, Mitchell and Adam Bishop are the reigning winners. Mitchell just barely missed out on an 11th rep before time expired.

Yet another event making a comeback, the strongmen will lift a pair of giants stone on each arm sleeve in what is functionally a behind-the-neck press. They will take turns attempting to lift the same weights, with that number successively increasing in each round.

The Bus Pull will see the athletes pull a Sacramento Regional Transit bus that weighs roughly 40,000 pounds in a race against the clock. The ground’s surface and the tires’ traction should undoubtedly play a role for the eventual victor.

The Power Stairs asks the athletes to carry an anvil-esque implement up a flight of stairs as fast as they can.

This event was the wheelhouse for five-time WSM Champion Mariusz Pudzianowski — who partly won his fifth WSM title in 2008 on the strength of a stellar Power Stairs performance.

Here’s the current list of athletes set to compete during this year’s event:

Several potential storylines lie in wait for this year’s competition. While Tom Stoltman is seeking a repeat, it could be the year of an upstart who surprises and takes home the hallowed WSM title.

How to Watch the 2022 World’s Strongest Man — Results, Backstage Coverage and More